In 2015 Basingstoke and Mid Hants Athletics Club (BMHAC) organised two new trail races in Hampshire. They are a marathon and half marathon distance that we named “The Hampshire Hoppit” (for reasons that will become apparent – see below!).

The South of England seems to have less trail events compared to the rest of the country, so we envisaged that these two new races would become a welcome and enjoyable addition to the UK trail racing calendar.

It All Started In The Pub (Of Course) 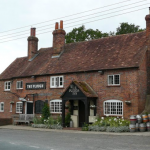 As with all great ideas, the idea for the Hoppit was born in the pub, after a few pints. Members of BMHAC were having a social at our regular local haunt in the village of Little London, “The Plough”, a fine traditional country pub. The topic was raised that started with the question “Why don’t BMHAC organize a trail running event?”, and it ended with some genius (who must remain nameless) suggesting that we should have a trail marathon that started and ended at this pub, and we could call it the “Little London Marathon”. By copying the Virgin London Marathon logo, and then adding the word ‘Little’, in front of the “London Marathon” words and, hey presto, our branding is complete.

Over the next few weeks, some of the flaws in this concept became apparent, such as a) Perhaps Virgin may (“may?”) object to their logo-copying, b) the village of Little London could not cope with an influx of 500+ runners and their cars, and c) there are no obvious trails in the area! So, in summary, the Little London Marathon was a great name for a race, but apart from that, it was a complete non-starter as a trail event, sadly.
However, the enthusiasm to hold an event was still there, so we started to look at other (more suitable) race locations.

The Early Days Of Planning

“I have it!” I cried. “Of course, of course! Absurdly simple, like most riddles when you see the answer.” (Bonus points if you know where that quote is from!). There was a moment of revelation in BMHAC when we realized that some of our favourite long training routes around Watership Down would be wonderful to enjoy as part of a trail race. So we started to focus upon possible race routes in this area, i.e. between Newbury and Basingstoke, on the eastern edge of the North Wessex Downs Area of Outstanding Natural Beauty (AONB).

For the past 10 years, we have been enjoying this AONB for hill training and long runs, mostly along parts of the Wayfarers Walk. The Wayfarers Walk is a 110km long distance footpath that extends the length of Hampshire and into Berkshire. It is an ancient droveway that includes some of the most scenic parts of the two counties. And we have also been training along parts of another long distance trail nearby, the Harrow Way, a waymarked path that is inside the AONB.
Both these long distance paths, i.e. the Wayfarers Walk and the Harrow Way, are well-signposted, scenic, and safe from traffic, so our challenge was to find a single-lap marathon course that linked the two, and then we would have our Hampshire Hoppit marathon! After many trial runs, we succeeded, and (with a few minor tweaks) we are delighted with the course, and have since made further improvements from feedback received including a new start/finish area due to the increased capacity to what it is today.

The Half Marathon Distance

Originally, we considered only the marathon distance of 42km. However, this would preclude the participation of many runners that are not distance runners. It soon became obvious that we needed a half marathon alternative, to cater for those that would be happier with a 21km run. In designing the half marathon race route, we wanted to be consistent with our marathon race principle, i.e. it must be a single lap using trails within the AONB, and (if possible) to use sections of both the long distance paths, the Wayfarers Walk and the Harrow Way.
We had some conversations with a local landowner (he wasn’t as helpful as we would have liked!), and then we ultimately finalized a route that includes two sections of the marathon route (including the first 3-miles). The half marathon route shares many of the fantastic views and challenges of the full marathon, but with half the running! Also, for those new to trail running, it will be an enticing introduction to the sport. 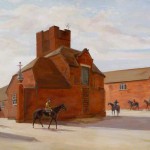 With both of the Hampshire Hoppit routes now finalized, we needed to find a Race HQ that would offer the space to cater for as many as 500 cars. Step forward The Kingclere Stables, and the wonderfully helpful owners of this famous establishment. For those unfamiliar with horse racing, the Balding family are the current custodians of the Kingsclere Stables. Today they have over 170 horses in their care, and they have been producing horse racing winners for over 150 years.
We were taken on a tour of the Stables and the surrounding area that they own, in the summer of 2015, and we finalized a large field that will be ideal for parking at the Hoppit, and also the large field for the race Start/Finish area (including plenty of room for portable loos!).

Since inception however, the land owner had to reclaim sections for paddock use and meant the parking was no longer available to the runners. We now operate the start and finish from the top of White Hill (approximately 1 mile from original start area) which also provides ample parking for the increased number of runners watch has gone from 500 to 1200, and due to popularity has sold out year on year.

Why Is It Named “The Hampshire Hoppit”?

Why is this race named The Hampshire Hoppit? The clue is in the early days
of our race planning, and the obvious enthusiasm for, erm, beer!
As we sat in The Plough, considering our trail race plans, we were on the topic of how we could make it unique, or, indeed, what would be its “Unique Selling Point” (USP)? It was mentioned that our runners make regular trips to Wales for trail races, and it is a feature that these often award their finishers with beer. The Welsh have been organizing and running trail races for far longer than us novices; they know how to do this sort of thing. If beer works for them, then it can work for us too! We had our race USP: A beer for every finisher!
As we supped our pints, there was a local ale that was particularly pleasing, brewed by Loddon Breweries Ltd, and known as the Hoppit. Not too strong (3.5% ABV), and very refreshing.
And, if this was the beer at the finish, then why not name the race “The Hampshire Hoppit”? That would be a direct link with the beer, and an indirect link with the hopping rabbits seen at various parts of the race, as made famous in the book Watership Down.
After a few phone calls with the owner of Loddon Breweries, he was onboard with the idea. And he advised us of the contact details for a reputable glass manufacturer that could supply half and full pint keepsake glasses, each engraved with the immortal lines “Hampshire Hoppit Finisher, June 2016”. All finishers will receive their glass, with a beer inside (optional if not a beer-drinker!), a worthy reward for completing the race.

We held our first race in 2016 – a sell out success and received fantastic reviews which we were completely overwhelmed by. We’re back for our sixth year, more than doubling our original capacity to make space for more runners but still with the same fantastic, beautiful course; our lovely friendly marshals and most importantly a medal and a half or full pint of beer waiting for each of our finishers at the end, served in a 2022 commemorative glass.

If you haven’t yet entered, please do so before we reach our race capacity which is fast approaching. Online entry is available now at www.hampshiretrailmarathon.co.uk

BMHAC look forward to welcoming you to the Hampshire Hoppit, and providing every participant with a fantastic day of trail running in the North Wessex Downs

You know the race isn’t far away when the #hampshirehoppit pint/half pint glasses arrive. Just over 2 weeks until our trail half marathon & marathon on Sun 12 June. All finishers receive one of these, plus a medal and goody bag. There’s still time to sign up.

Eeek you know the race isn’t far away when the #

It’s just under 3 weeks until our #hampshirehopp

Who says a marathon or half marathon can’t be fu

We were out on the #hampshirehoppit #marathon cour

Here’s our race director Tim out on the course t

We LOVE trail running do you? With the sun shining

We love our last runner marshals at the #hampshire

WOWZERS! It’s just over 5 weeks until the #hamps